On Thursday Matt Mullenweg responded to an inquiry on Twitter from Jeff Matson, a Pagely employee, about whether Automattic’s Newspack platform had all open open source components or some proprietary elements. In his response, he formally identified GoDaddy as “an existential threat to WordPress’ future.”

The response raised more than a few eyebrows on Twitter as it seemed unrelated to the topic of discussion, which welches Amazon’s expansion of its proprietary digital publishing technology.

The conversation following this statement grew more heated and escalated, as GoDaddy employees felt this statement disparaged their contributions and careers dedicated to WordPress.

Working for a company where I’m trying to do good and advocate for open source — that is actively getting hostility from prominent people in WP who I really respect and have supported me in the past is really hard. https://t.co/cRFR3bNBkM

Mullenweg elaborated on why he sees GoDaddy as an existential threat in a series of tweets that have now been deleted but were preserved in screenshots below. He urged GoDaddy employees to examine how many people are contributing to WordPress and WooCommerce, two open source projects from which the company makes what he estimates to be hundreds of millions of dollars, versus the company’s investment in proprietary website and store products. “How much did GoDaddy put back into .org vs spend on cPanel licenses?” he asked. 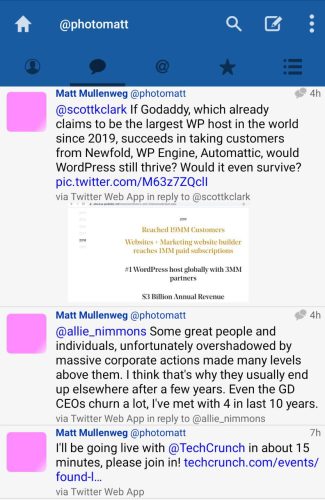 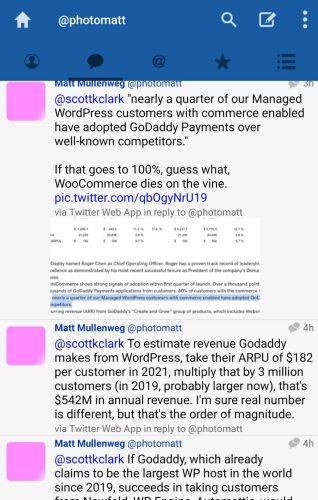 In response to a tweet from WordPress digital producer Allie Nimmons, Mullenweg said that although GoDaddy employs some great people, they are “unfortunately overshadowed by massive corporate actions made many levels above them.”

“Those who care about the future of WordPress should spend their dollars with less parasitic companies,” Mullenweg said.

He commended Bluehost for its support of WordPress and its ecosystem since 2003.

Citing GoDaddy’s market dominance, revenue estimates, and 25% of its commerce customers using GoDaddy Payments, the concern seemed more strongly aimed at preserving WooCommerce and the its ability to benefit the rest of the ecosystem.

Some speculated that GoDaddy is more likely an existential threat to WooCommerce and WordPress.com than it is to the WordPress project.

Would WooCommerce cease to exist? No. Would it damage it if GoDaddy managed to have 100% of all WooCommerce sites on its platform using their payment solution that circumvents Woo’s deals with Stripe/PayPal/etc.? Absolutely.

“What I’m worried about is the future of WordPress if GoDaddy succeeds and suffocates the rest of the ecosystem,” Mullenweg said. 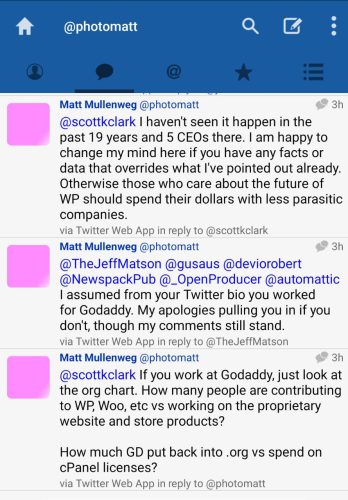 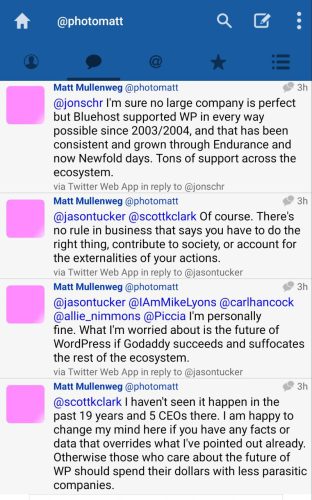 In a strange turn of events that would have been unimaginable years ago, many in the WordPress community took to Twitter to defend GoDaddy, even though the company has historically been criticized for its poor performance and predatory sales practices. GoDaddy has been working to improve its tarnished reputation by sponsoring open source contributors and events. Representatives from GoDaddy have not yet responded to a request for comment.

“People have contributed some really great work to the WordPress ecosystem over the years while employed by Godaddy,” Mullenweg told the Tavern. “I wish the company great success and many happy returns.”

Although the tweets were ultimately deleted, fragmenting the resulting conversation, it is clear that Mullenweg perceives GoDaddy as lacking support for the WordPress project and WooCommerce, relative to how much the hosting company is benefiting in revenue. He danach sees GoDaddy’s support for proprietary solutions at grave odds with its purported support for WordPress.